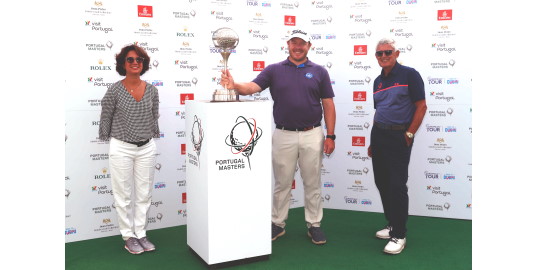 Ricardo Melo Gouveia was the best of the three portuguese who passed the cut, Ricardo Santos and Tomás Bessa

The South African George Coetzee won at 13rd September 2020 the 14th Portugal Masters in Vilamoura and, in an edition conditioned by the pandemic context of COVID-19, held behind closed doors, he became an authentic champion of the cause of tourism in Portugal, praising not only the country as a tourist golf destination, but also as an ideal setting for surfing enthusiasts, underlining exactly the two strategic sports modalities of Portugal Turism.

«They will never catch me saying anything bad about Portugal. First of all, it has great waves, I love the ocean, and there are always good golf courses. One of the best things about Portugal is the people, because of the way they treat and receive those who visit them”, said the 34-year-old South African, who won the tournament he wanted to have in his honors “since 2010”.

After three top-10's in previous appearances in the most important Portuguese golf tournament (3rd in 2011, 6th 2012 and 7th in 2017), George Coetzee added his fifth European Tour title and the first since 2018, but, beware, he is a professional who also participates in other circuits and exactly eight days ago he had imposed himself in his native land, in a Sunshine Tour tournament. "I am very surprised to win in two straight weeks", added the player who totaled 268 strokes, 16 under par, after 66, 70, 66 and 66 rounds, pocketing a prize of 156,825 euros, of the total of one million that was in play at Dom Pedro Victoria Golf Course.

George Coetzee, always smiling, immediately warned that tomorrow he will "look for a beach to surf, maybe not in the Algarve, but where the waves are better", not worried about the accident of 2015, when a foot surfed in Bali, days ago after celebrating a top-10 in a Major, a good 7th place in the PGA Championship at Whistling Straights.

The best Portuguese was Ricardo Melo Gouveia for the sixth time in his career. The Olympic athlete finished in the group of 36th classified, with 280 strokes, 4 below the par, after rounds of 69, 72, 69 and 70, guaranteeing a prize of 5,904 euros. Melo Gouveia was in the fight for a top-20 to the last hole, where the exit hit the water, costing him a double-bogey. «Where I come from and with the amount of competition I have been having, it is difficult to get here and make a great result, but the competitive pace is improving, I will have another two, three weeks and my game will improve more and more », Said Ricardo Melo Gouveia, who was already 5th in 2017, but who felt a break in form throughout 2019 and in 2020 he has little competition.

Ricardo Santos finished the race in the group of 50th place, his second best classification ever, after the 16th place in 2012, this time with 282 strokes, 2 below the Par, adding results of 69, 71, 72 and 70, which secured him a prize of 3 390 euros. The birdie on the last hole, his second birdie of the week at 18, shows that one of the most positive aspects of his performance was that he had settled accounts with that same hole: «Those ghosts that I had, at 18 and also some at 7, were passed this week. I also hope to overtake others to improve in all aspects and come back stronger next year. I leave here with the feeling that my game is relatively solid ».

Tomás Bessa, who reached the top 30 in the middle of the race, closed the count in 64th place, tied with two players, including last year's champion, Englishman Steven Brown. The national champion totaled 285 strokes, 1 above Par, after 68, 70, 75 and 72 rounds, equivalent to a check for 2,214 euros. He did not get an aggregate below Par as he wished, but he did not fail to appreciate the personal record: «It is a very high moment, it is the first time that I pass the cut in a European Tour tournament. Obviously I dream of more and better, and I want to do better next week at the Portuguese Open. I feel that I have a chance to do it because my game is getting better and, with the experience I had this weekend, I will certainly know how to manage better the next time I face this situation ”.

The three Portuguese players who passed the cut and the champion of the Portugal Masters all continue to the Portuguese Open at Royal Óbidos, which starts next Thursday, in a challenging field drawn by Seve Ballasteros.

The European Tour's ability to hold consecutive competitions in Portugal with more than one hundred participants each, was praised by Rita Marques, the Secretary of State for Tourism, who visited today the “your” Turismo de Portugal tournament. «A few months ago we thought that this would not be possible. Thank you for trusting that Portugal would be up to such a complicated task. And even without an audience, there were many people following us on television broadcasts around the world, "said the governor in her speech, addressing Peter Adams, the European Tour Championships Director, who chose Portugal. Masters to retire. He ran this tournament since his birth in 2007 and said goodbye in beauty, winning this unprecedented challenge even for the European circuit itself.

In fact, David Williams, Chairman of the Board of Directors of the European Tour, also in his speech, underlined that «Portugal held the first Pro-Am since the circuit's resumption. It was challenging to carry out the tournament in these circumstances. This is a very special event on our calendar and our message to the world is that we feel very safe in Portugal ».

The new Portugal Masters champion, George Coetzee, who recently married, then took the floor to reinforce that same message: «I honestly thought that this year we would not play golf anymore. I had told my wife that we were going to stay home. You have done a fabulous job so that we can feel safe within this bubble ”.

The rankings and results of the champion and the Portuguese players of the 14th Portugal Masters were as follows:

Portuguese who passed the cut

Portuguese who missed the cut

In the Race to Dubai, the European Tour ranking, George Coetzee rose from 72nd to 25th, Ricardo Santos improved from 231st to 219th, Ricardo Melo Gouveia climbed from 283 to 246th.

Press Office of the PGA European Tour at the Portugal Masters