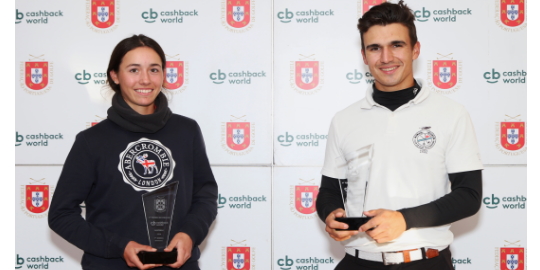 With the triumph in the men's race of the 4th Cashback World Circuit Tournament, at Montebelo Golfe, Pedro Lencart adds and continues on his winning streak. In “Ladies”, Isabel Laulhé, a 15 year old from Liechtenstein, from CG Vilamoura, showed why she was one of the great revelations of women's amateur golf in Europe in 2020.

Pedro Lencart (CG Miramar) confirmed his favoritism by winning the Gold category (gross) in the men's event of the 4th Cashback World Circuit Tournament, which took place this weekend at Montebelo Golfe, in Viseu.

Having been the best in both rounds and with some margin, the national amateur champion and new holder of the FPG Cup - BPI added 139 (69-70), 5 under Par 72 of the field, in what was his fourth victory in 6 tournaments played at the Cashback Circuit 2020.

"I played solid during the two days," said Lencart, No. 1 of the Cashback World Circuit and also of the National BPI Ranking, positions that he reinforces. “I had some moments there when I missed one or the other 'shot', but I was always able to recover well. It was good under the conditions that were and taking into account the field that it was. ”.

This Sunday it rained a lot and the start of the second round had to be postponed by 30 minutes. “Today it was more difficult, a little more wind, it rained a lot during the lap and the field was much wetter”, he added.

In the women's competition, the victory belonged to Isabel Laulhé, from Liechtenstein, 15, one of the great sensations of European amateur golf in 2020, currently residing in the Algarve, a member of the Dom Pedro Golf Academy and playing naturally for the Vilamoura Golf Club .

Isabel Laulhé caused a furor when earlier this year, between January and February, she climbed more than 1000 places in the Women's Amateur World Ranking, entering the top-500 (currently number 655). So it was 11th at Internacional Amador de Portugal and reached the quarter-finals of Internacional de España.

The young athlete from Liechtenstein was also the first in the Silver category (net), but the respective trophy went to the second, Inês Belchior (Quinta do Peru), since the prizes cannot be accumulated.

Sofia Sá (775th worldwide), from Quinta do Lago, who won three of the four tournaments that she played on the Circuit in 2020 (1st and 2nd Tournaments and RS Yeatman Cup), thus reinforced the first place in the Gold Ranking of the Cashback Circuit. The runner-up in the table, Leonor Medeiros, national vice-champion and winner this month of the Federation Cup - BPI, did not compete in Montebelo.

"I was not at my best at all, I missed many fairways, which in this very challenging field is super important," said Sofia.

The 5th and final Tournament of the Cashback World Circuit will take place on the 14th and 15th of November at Quinta do Peru Golf & Country Club, in Azeitão.