Lucas Azinheiro was 2nd at 2nd Cashback Tournament at Estela

Days 6th and 7th April at Póvoa do Varzim 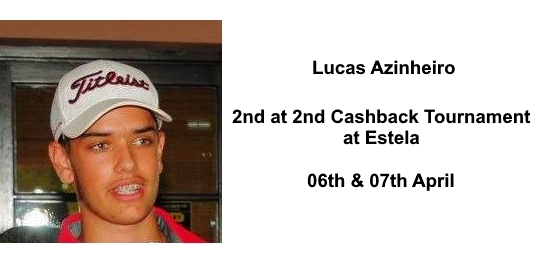 Lucas Azinheiro was 2nd place, tied with João Maria Pontes of Miramar, in the 2nd Tournament of the Circuit Cashback World that took place April 6th and 7th, at the Estela course in Póvoa do Varzim. The winner was Daniel Rodrigues, of Miramar with 146 strokes (73 + 73)

The bad weather was a constant in this tournament causing delays due to interruptions because the strong wind accompanied with rain. Despite these conditions, Lucas Azinheiro made 150 strokes (76 + 74), the same number reached by João Maria Pontes of Miramar, finishing both in 2nd place.