At Quinta do Perú from 5th till 08th of September 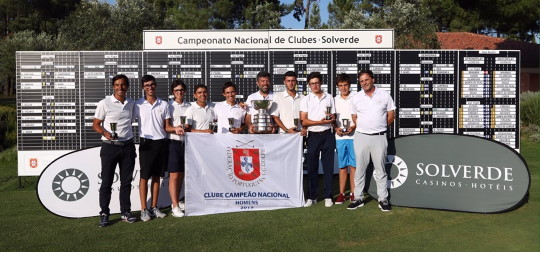 Miramar beat Vilamoura in the final, winning for the second year in a row the Viscount Pereira Machado Cup. In ladies, Quinta do Peru raised for the second time in its history the Nini Guedes Queiroz Cup.

CG Miramar won Sunday, for the second year in a row, the National Club Championship - Solverde by beating CG Vilamoura 5-2 in the final, at the Quinta do Peru Golf & Country Club in Azeitão.
In the women's race, the triumph smiled at the hosts of Quinta do Peru, victorious in the final against Orizonte.

Miramar lost both pair matches in morning foursomes to Vilamoura, but went around in the afternoon winning the five singles matches. It was his fifth triumph in the men's competition, which he attributed to the Viscount Pereira Machado Cup.
The two-time Miramar champions, with Sergio Ribeiro as captain and coach, lined up Daniel Rodrigues, João Maria Pontes, Pedro Silva, Pedro Neves, Diogo Mealha, Alberto Costa Marques and João Iglésias.
Vilamoura, national runner-up of men for the second year in a row, coached by Joaquim Sequeira, with the players Luca Lopes, Romeu Gonçalves, Alexandre Castelo, Jamie Mann, André Sancho, Tomas Mician and Bruno Vicente.

Oporto GC beat CG Belas 4-1 in the third-placed match. In the remaining classification of Flight A, which included the first eight teams of the stroke play phase, Quinta do Peru was 5th, Aroeira 6th, Santo da Serra 7th and Lisbon SC 8th.

In the Flight B final, Paredes GC defeated CG Estoril to finish 9th.

In the ladies' event, which awards the Nini Guedes de Queiroz Cup, Quinta do Peru also lost the foursomes match, but recovered by winning both singles, for a 2-1 favorable result.
Led by trainer Cláudia Dantas, Quinta do Peru - which won its second title in the competition (the first was in 2013) - featured Leonor Medeiros, Sofia Sá, Teresa Alves, Federica Leitão and Teresa Alves.
Orizonte, with Patricia Brito and Cunha as coach, aligned with Marta Lampreia, Beatriz Themudo, Luciana Reis, Constança Mendonça and alternate Mafalda Magalhães.
Miramar, who had won the last four editions, had to settle for the third this time after beating Lisbon SC 3-0.

Sérgio Ribeiro (Miramar)
“This victory is the result of hard work, a lot of dedication, even suffering, because a highly competitive athlete, like our players, is serious about golf. Miramar's secret is work, work, work, as well as the dedication of all the staff, management and club members. ”
“I want to wish all the Portuguese who are going to play this week's Portuguese Open, good luck to two players from Miramar - Dani and Pedro Silva.”

Claudia Dantas (Quinta do Peru)
“We are obviously happy, especially because we were the host club on a course that was in excellent condition. Congratulations to Sofia Sá and Leonor Medeiros, who lost no matches and had a very high level of play. ”On the downside, the scant number of clubs participating in the women's competition, which is sad. I hope that in the future there will be more and more players.

Joaquim Sequeira (Vilamoura)
“Our players won both pair meetings in the morning. They were accompanied by each other. In the afternoon, in the singles, they may have felt more isolated, allowing our opponent to turn around. It's our fault. When our best players lose with the one who is theoretically the least strong of our opponents, something is wrong. We gave a lot of giveaways - and you can't win a game in the final this way. ”

Patrícia Brito and Cunha (Orizonte)
“Not neglecting, I think I knew a moment ago, because we had a very united, very balanced team. Beatriz Themudo played wonderfully, but couldn't win the match because her opponent, Leonor Medeiros, played better and put all the putts in. But I congratulate my team, which was the revelation of the race. I just hope that next year there will be more women's teams participating and that the format is the full format and not the small format that is very unfavorable to the more balanced teams. ”

In Photographs: The national champion clubs in men and ladies, respectively, Miramar and Quinta do Peru