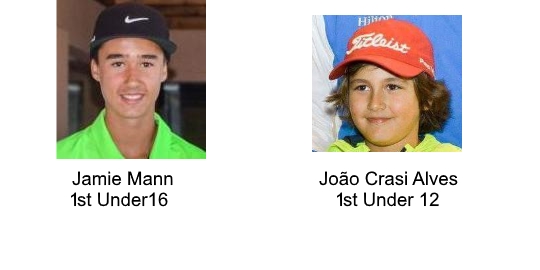 Jamie Mann was 1st in Under16 on the 1st Circuit Drive Tour that took place 19th and 20th January at the Penina Golf Course in Portimão. Soon after in 2nd, Tomas Mician and Gustavo Monteiro was fourth.

Also João Crasi Alves was the 1st place in Under12 with 154 strokes (78 + 76). In the same category, Dinis Silva Rebelo took part, which was 14th.
In the Under18, Luca Lopes Azinheiro was in 8th place followed by Bruno Vicente in 10th place. In 11th place was Gonçalo Teodoro and in 13th place was David Rocha Martins. Winner was Daniel da Costa Rodrigues from the club Miramar.

Still in the Under16, Luca Lopes reached the 6th Classification and Ricardo Serpa the 11th with Miguel Krowicki being 14th. 4 places further down, in 18th was the position of Henrique Rebelo.

In the Under14, Alexander Amey reached the 5th place having João Freitas Alexandre stayed in the 23rd. position. The victory in this category was of Alberto Costa Marques of the club Miramar.